Stripers on the fly and light tackle is about on par for mid February. Cold water temps and lethargic fish make it somewhat challenging, but the real issue is wind. I'm having hard time getting on the water between the wind lately. We have had some dry cold fronts that come down from the north and Stripers just don't like them this time of year. Between those fronts is pretty solid for numbers when you find bait and active fish. This past trip was tough. Big moon, post front and 15kt wind. All the reasons to stay away but I was able to scratch up a dozen fish. The key is finding bait.  I dead stick slow falling flies through the bait and will often let the bug hit the bottom in 25-35'. And with a slow steady strip strip pause they will grab on occasion. I like this time of year since the next grab could be the one. Big fish will be just about anywhere so you just never know. I caught a 22lber This past January that came off a small point and ate in 10 feet of water. So, covering the the water is important and good electronics is a must for consistancy. Most the fish right now are 18-24in class but good sport!

Carpin has been pretty good around these parts. Pretty good in Feb is 0-3 fish a session. Im fishing two-three hour windows at a time during the best light and moving around to several bodies of water all over the south bay.

Ive staked out a couple of lakes that have had a few really nice fish moving around. It hasn't been easy to feed these fish. They are hyper aware of there surroundings and there isn't any shore line cover what so ever. That and the Gin clear water makes it pretty challenging. Yesterday was completely void of Carp. I didn't see any in four hours. A good number of bass cruising around though. This morning I started on a muddly little backwater pond/slough thats close by and had a nice shot on one of those fan tail carp. Not a big fish but I stalked it for a little while before it finally spooked. 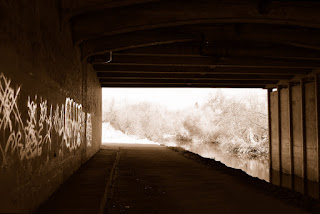 From there I went back to the lakes and saw one fish working a steep shoreline. I just couldn't a get a good angle on her, so I kept moving around looking at small flats adjecent to deep water breaks.   I could see some deep mudders out in probobly 8ft of water out of casting range, so I kept checking back for a shallow fish. They will move onto the small flats for short windows right now and it takes a little luck to be in the right place at the right time. I ended up with another hammer knocker fish that was trailing a bigger fish. I think the lead pig sensed me and slowly drifted off into green water and left him coming at me.  I put the fly on him and we were off to the races. I love seeing those clear water fish eat and go through the head shkes before bolting off the flat. It's so killer and NEVER gets old.

Ive noticed some are big bellied heavy fish and others long and lean. Like 3ft long! It seams the leaner fish are following those heavy females laiden with eggs. I'm wondering now if these are just big lean Male carp? They are a good ways off of spawing but they have started to get in a sort of pre spawn mode. I saw two fish today in deeper water that would go 25# easy. They just wont get in range to put a fly on them. Today was blue bird brilliant skies and pretty warm and I noticed a few bugs going off but only had two shots on a couple of big ol ropey Carp but I'll take it!  I will say despite there lean condition they are bullets and will bolt half way accross the damn lake in seconds! Super strong. I'm going to give the Carp a rest for a couple of weeks with only short weekday outings to keep them honest. It's time to hit some Largemouth and Stripers. I also want to get out and do a C&R Sturgeon trip on the bay. Fishing out there has been pretty good. 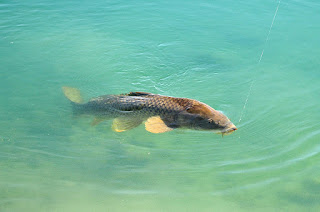 I had a half day to work with so I made the best of it with an afternoon Carp session. Went back to the fish from yesterday and couldn't get anything going. Hazy skies made it tough to spot them and then track them when I did. After a couple of hours I decided it would better to just leave them alone instead of spooking the whole dam school and come back when I can see them. I decided to go scout a couple of near by areas. First pond I went to was dead. No life at all but it has some nice Mirrors so I stuck around for a good hour. Nada. They just weren't around. Next place I went is two lakes seperated by a levee road. One of them is about 10 acres the other about half that. Water levels were low and water was clean. I have fished here before and caught some nice fish but it has always been kind of stingy and I havn't messed with them in Feb. Here is a photo of one from this place two or three years ago in late March. 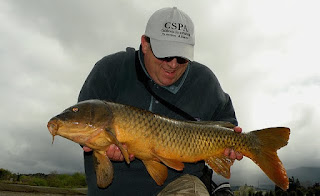 There is almost no cover here and you have to be sneaky since you are totally exposed to the fish so I stayed way back and walked the North East areas of both lakes with the thought that I would find the warmer water this time of year and saw nothing. While walking around the west side of the larger of the two I spoted one then two and then a couple of trios working the shoreline. All of them were quality fish with a couple in the high 20s maybe more. I put a fly on three fish wih no response. Didn't spook or blow out, just didn't do anything. That last shot which was a slob of a fish swam around the 8# flouro leader like I was casting 30lb mono. My plan was to splash the boat and go after some Stripers in the morning but I think I'll put that on hold and get back over and spend some time targeting these fish. I'll have my work cut out and will have to make a couple of adjustments but I love casting to big active fish. I love sight fishing alone but this one time I wouldn't mind having a second set of eyes and brains from a skilled Carper to fish with in the morning. Here is a shot of a really big fish just before dark. 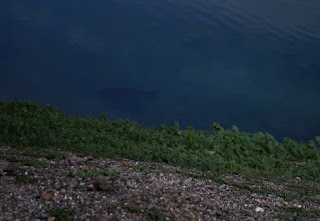 Winter Carp on the fly has been hit and mis since early December with a small handfull of days when they are really happy. Thing is that they WILL eat so I've been keeping after them. Especially on a nice warm day like today. I had three shots in the first 20 min and stuck the third fish. It pounced and it all came together nicely. When they come up tight in the winter months they aren't particulary fussy, they just have to have it right in there face and will not tolerate the slightest mistakes, noisey entry or even foot steps near by so refusals are the norm. This one, and all of the others the last couple of months ate a simple #8 brown bugger. Today was in the low 70's and there were several extreme shallow fish. Those are cool to watch but aren't always the easy ones to fool this time of year so I was pretty stoked! 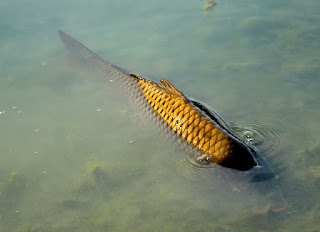 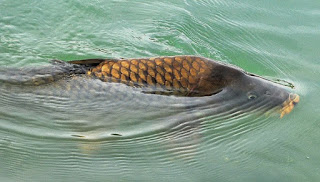 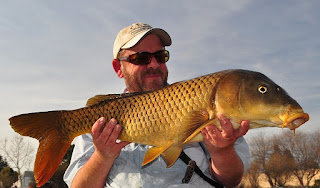 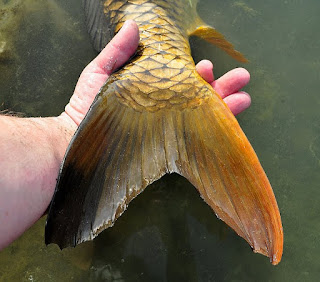