One of more memorable fish for the year happen today. It was about 20 ft down the bank in shallow water cruising away from me with a brush pile between us. I wouldn't make this cast count 95 out of 100 but I nailed it about a 18" ahead and just to the right of the fish and everything connected. It was really rewarding! Yeah I know, I guess you had to be there.  Anyway, the weather was less than ideal for sight fishing carp but I went anyway today. The defused light with light amber lenses isn't too bad to fish in if there is no wind glare. Suprising number of close range shots on cruisers despite the shit weather.. We had about 20  minutes of beautiful sunshine filled windless sky about 3pm and they shut off like a switch and I didn't so much as see fish the rest of the afternoon.  I'll hit em again in the morning as it seems I was a bit late today and I sense they are on a morning bite. I actually passed on a coupl of little rat Carp and that doesn't happen very often in Late Dec/Jan so I would rate the fishing as good for my neck of the woods.  In an attemp to get a self xmas Carp photo, I had it set on a 20 sec delay. Just as I gatheered up the fish in my hands a gnarly gust with sideways pounding rain rolled through and the camera took a dive and did a lens plant in the mud just as it flahed the shot..I will remember that fish.

Targeting Winter Carp here means small waters. The area I live in is dotted with about 25 small man made lakes and ponds. The vast majority of them are Urban or district owned ponds nestled behind Malls, fast food places and off major freeways and traffic corridores.  So, they arent city parks which I despise and avoid completly. Some are surounded by chainlink with cut openings or a required fence jump but most are just overlooked resouces and scuffed off as lifeless scum ponds. I usually have the place to myself or maybe a Bass guy or homeless camping lakeside, but for the most part they are quiet isolated oasis' in the middle of 2 million people..

With the exception of a couple, none are no more than 10-12ft and stay relatively clear with little run off all Winter. Carp and Bass are in vertually all of them, and they are connected via an elaborate system of culverts, ditches and the odd canal or pump. The sight fishing is at it's best Dec-Feb when they draw the levels down exposing the flats and giving me access to creep around them. I seldom if ever fish these during the Spring and Summer since sight fishing them with high water is tough. Two of the ponds I just happened to see from a Jet coming into local AP one day.. I could actually see the mudders from the air as we flew about 400ft above coming in for a landing. I found it and caught fish there the next day! I've only scratched the surface and I know there is at least twice as many I have never fished. 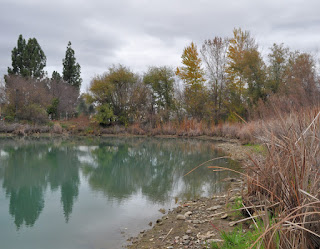 Some hold better quality than others and a few are adjecent to Industrial buildings with connecting cooling towers. Those are the ones I like to start with in the dead of Winter. It's an almost gaurantee you will get a shot or two and a few fish can be found shallow every day of the year regardless of the weather. The one I fished ysterday was no exception and I saw a dozen fish in three hours. They won't stay up on the flats in the winter..They will move up and down all day with short windows of shallow feeding. I spotted a couple of nice fish in the 10lb class from a distance but the ones I eventually fed a fly too were much smaller and about average for these small bodies of water. 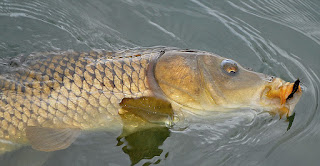 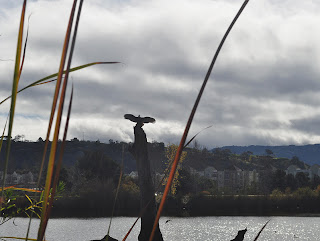 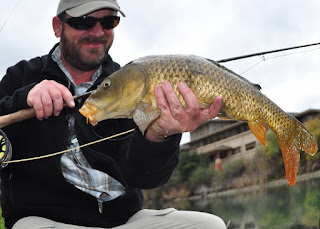 The major food sources on the lakes is definitly clams. The mud is chocked full of them. Also crayfish and Japanese Smelt. I did see about 10 fish attacking a subway sandwich that was thrown off an overpass one day so I guess they will eat about just about anything, but they really like dark buggers and small flashy baitfish patterns.


Have a great holiday folks!
Posted by David McKenzie at 5:48 PM 6 comments

Fishing has been slow. Hopefully I can turn that around soon. Stripers are eating flies but it's tightened up on quality fish as of late and you have to work for them on both the lakes and the rivers. At least for me anyway. Cant really complain about conditions since everything is fishable even with all the rain and some beautiful days low 70s the last week. I'm gong to focus on the Saltwater the next week or two for some different scenery and fish. Happy holidays! 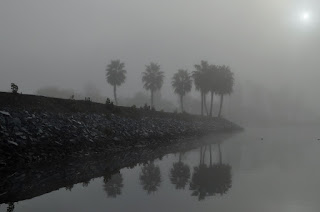 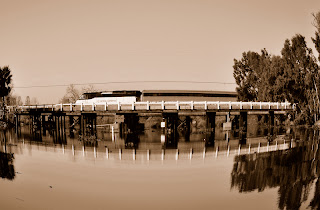 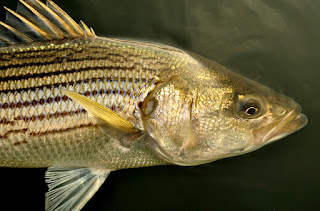 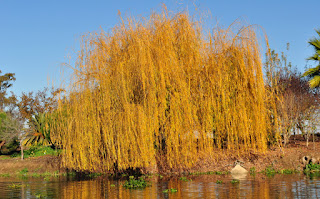 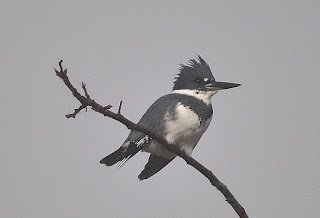