Spent the last couple of days chasing Stripers. Key word here is chase becouse it was pretty slow fishing. It was great to get out on the water and take in the warm weather were having right now. We are supposed to get front mid week so maybe that will shake things up a little. The fish have not quit moved into there winter pattern with water temps still in the mid 60s and bait spread out from the surface to 80' and deeper..Stuck a few fish here and there and really couldn't have asked for better fishing conditions so I cant complain. They'll come around soon enough.

Tench on the fly

What a beautiful warm Thanksgiving day! Got a few hours in early before I headed home and into a food induced coma. Regarding the Tench. We have two small coastal lakes with established populations. Ive never caught any much bigger than the one here. Ive heard of 6-7lb fish coming from this water but frankly I would be really suprised.  They fight well for there size and by far produce the most slime of any fish I have ever caught. These two small lakes certainly hold the decendants from the first stock brought over by Italian imigrants in the 1800s as a food fish. They introduced into small farm ponds and other places from the Central Coast to Northern California.  I could be wrong, but I have never heard of any other US locations where they are targeted and caught on fly or bait with any regularity. One lake is about an acre in size next to horse stables adjecent to a beach trail system and the other is where I fished today. It's about 50 acres and a half mile long. A really shallow horse shoe lake with terrible access. It was shown to me so I'll just leave it at that. 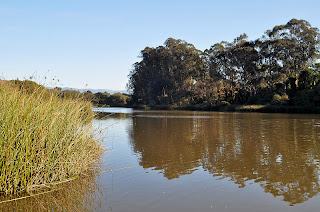 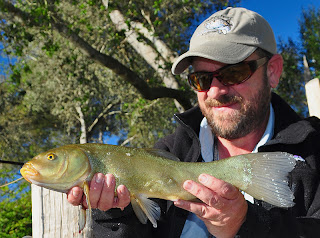 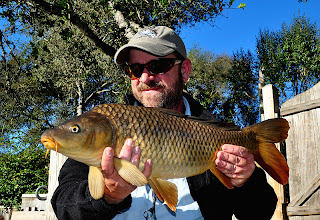 Small tench were cruising around the shallows with some decent size carp. I was able to manage three tench and two Carp. All the ate a small Black Matuka. One carp was caught blind casting to mudders the other was a challow cruiser. The Tench also were cruising in and out of two shallow pockets. 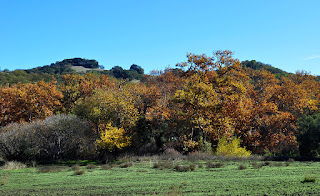 I also hit two larger lakes to check the flats and it was really dead. A few deep mudders that I cast too but that was about it and i never connected. Not much life in the shallows with the cooler nights we have now so things have tightened up. They will be available right on through the winter but it's tough fishing and most days are going to be 0-1 or 2 fish on a good day.  Seasons are changing here and it's looking alot like fall in the Valleys with the Sycamore's and Willows lit up along the creeks.  I'm looking forward to winter!

Posted by David McKenzie at 1:54 AM 1 comments

Well,  I guess it's Fall somewhere!  Today was in the mid 80s and supposed to be a little warmer over the next couple of days.

Yesterday was the 2012 Striperfest on the Delta.  My brother and I went out on his boat and flogged the river for a bunch of small Stripers and Largemouth. It was a beautiful day out on the Delta with hardly a breeze and boat traffic was light everywhere we went. Fish were on the small side but it was still great to be out. The highlight of the day was getting shortlined by a really nice fish right at the boat. High teens maybe better but it wasn't meant to be. We worked that area over hard for only dinks but fish like that keep me thinking about the next cast all day. We got over to Bethel Island for the Fest in the evening and had a great time and some good grub! Striperfest raises funds for the protection of our Striped Bass fishery in the SF Bay/California Delta..It is the war chest funds that the Striperfest raises that help the front lines fight off private interest groups from steeling precious water from our California Delta. It's an on going battle with much work to do but it seems we are making ground.


Today I spent the day Carpin..A few hot days and they were back in business. First lake gave up a couple of 5 lbers and went dead..Moved over to another reservior that usually gives up better quality and camped on a qtr mile long flat and took the shots it gave me. I was able to feed three and land two. All good quality Carp, including the one I missed. Hard fighting healthy fish. The sweet spots on the flat had some depresion or small inlet channels that led to deeper water. Ocasionally a good one will pull up in the skinny water pockets those small channels provide and browse around. Couple of them got there day wrecked! At some point things will cool off and the fish will pull off the flats for the season. At this point I have another month of good sight fishing so I might as well take advantage of it.