The warm weather showed but haze never broke for full sun. I did get on mudding fish but ended with no grabs unfortunatly. A little frustrating but fun as hell. That's flats fishing for Carp. No excuses though as the conditions were as good as any time of year.  Great fall scenery and weather made for a good time though. 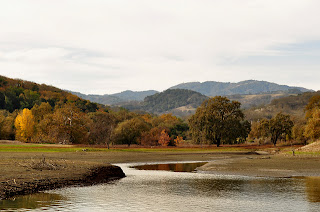 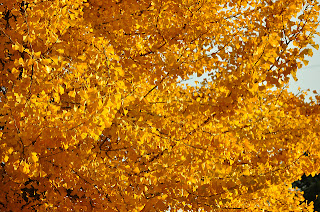 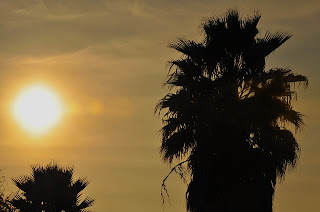 I had to get one more session in today. Lots of traffic this morning at the crack of dawn. Not sure where the hell all the people were going..Fishing was slow and steady all day. No great concentrations of fish, just one here one there type of day. Really enjoyed myself. Saw an absolute MONSTER carp today. This fish was an honest to goodness 35+.  She swam right by the boat in about 5ft deep. With 10' of vis I could clearly see the beast. It was beautiful. Carpin tomorrow. Forecast for high 60s low 70s and sunny. Could be good. 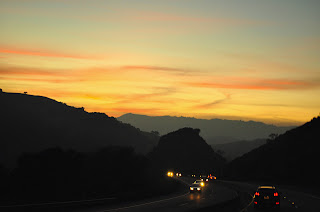 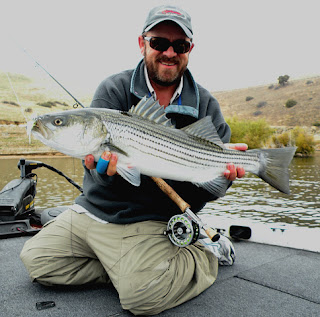 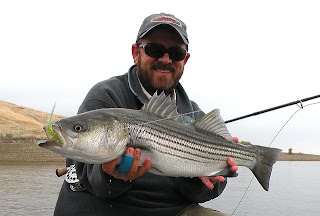 Absolutly beautiful day on the water. Fishing was ok with a stady pick of Largemouth and Stripers,  but the highlight was the weather, it was fantastic. 70-72, light 5-7kt breeze, brilliant fall winter sunshine and hardly any boat traffic. Can't ask for more. I had a big Striper spit a fly today and that was about the only down side. It was a good one, and it hurt. I came tight on the fish, couple of swashing big head shakes and she came ripping toward me heading for deep water. I was trying to strip as fast as I could when my line had lost traction and critical tension on the fly. I never felt like a got a good purchase on the fly and it all fell apart. I didn't see the fish but I knew it was a good one the second the rod loaded and just the way she ate. Bummer. 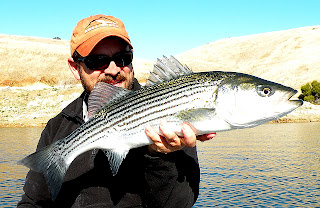 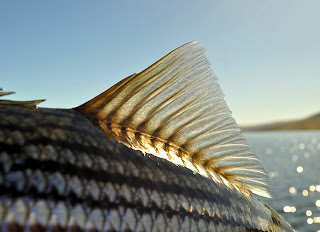 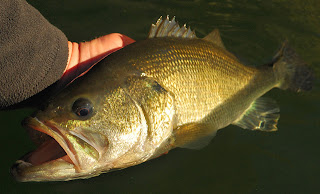 You can still get some fishing in before dinner! 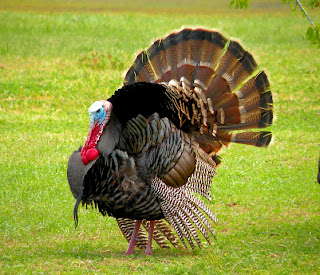 Posted by David McKenzie at 9:17 AM 0 comments

Fall has finally come through this neck of the woods. Well, for us at least. Highs in the mid 60s lows in the  low 50s to high 40s and rain.  I know, pretty mild in retrospect but it feels cold to me. The front that came through screwed up the Stripers.. I was able to catch plenty of fish but nothing to write home about.  I only had one good grab from a nice fish and didn't connect. Striped Bass in general hate fronts. Especially post front conditions. There is that window right before a front when there is a slight pressure drop that will sometimes get big fish on a chew but post front sucks. And thats what I had, blue bird north wind crap. See what happens this week. 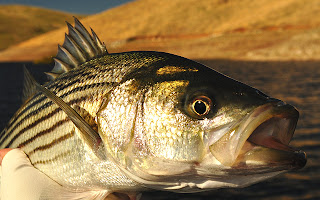 I decided to dedicate Sunday to scouting out some Coastal Steelhead water before the opener and give carp a go. My home water coastal streams look good. I have a good feeling about this year and cant wait to get out there. Plus it was drop dead beautiful in the Redwoods. Steelhead live in some killer places for sure. Plus I got to hang out at the beach for a while. The entrance to the harbor on the outgoing was no place to mess around. Nasty swell breaking right at the jaws. 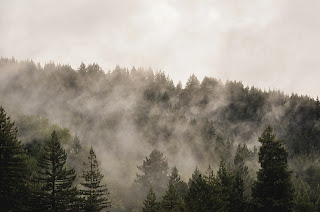 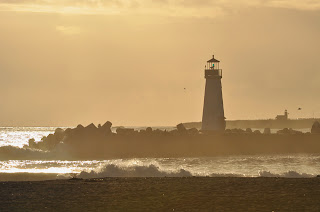 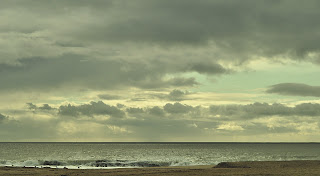 The slight rising water we had with the front/rain had carp creeping around the shallows. Especially since this was a warmish front so it had a positive effect on the Carp fishing. So, Carp were a skunk breaker for me and I got to pull on some hard fighting fish. 6 of them to be exact. In the process I was a able to get two wild Goldfish to eat. They arent easy to fool for me so they were a bonus I guess. 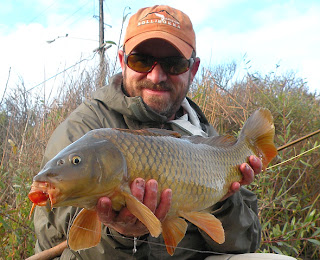 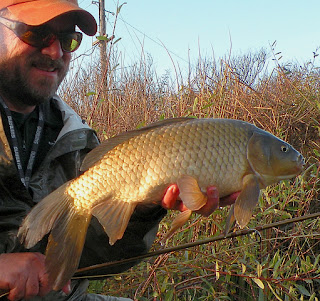 We are blessed on the west coast with Sea Run and land locked population of Stripers. Unfortunatly they are are in real danger of being senselessly lost to greed and political pressure. The proposal to the California Dept of Fish and Game is to eradicate them with ridiculous regulation changes. The thought process here is they are causing our endangered Salmon & Steelhead populations to decline due to predation. This presumption is nothing more than that, a presumption and not founded with sound science. Stripers were introduced to the west coast in the late 1800s and have shared the same water sheds for well over 100 years. The decline in Striped Bass has also coincided with the low returns of our Salmonid speices.

Although 100 years doesn't amount to a pimple on the ass of evolution, they are not the sole or primary reason for the crash of our Salmon and are being used as nothing more than a tactic for irresposible water export practices. Those that want the water,  would like you to believe otherwise however. It boils down to water diversion and habitat degradation as the the primary factor of our Salmon and Steelhead poor retuns. Including Striped Bass! Our Stripers are at historica low numbers. Instead of " doing the right thing" and monitoring water diversions  from our California Bay/Delta, it's just easier to blame the Striped Bass. The whole thing is ludicrous. Do Stripers eat salmon smolts? Of course they do. Massive pumps, water diversion, poor habitat and low flows kill a hell of a lot more and MUST be considered before destroying this fishery. Please do the Striped Bass a favor and read the letter below. If you agree, print, sign and mail to the address provided ASAP. 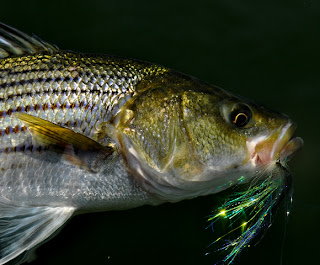 RE: My opposition to DFG’s proposed striped bass regs.

I am a California angler and I am writing to express my absolute opposition to proposed striped bass regulation changes. Following my review of DFG’s proposed Regulation changes, I have become aware of these additional facts:

• The Department of Fish & Game (DFG) and other defendant interveners in the litigation that brought about the Settlement Agreement leading to the striped bass regulation change proposal prevailed in the summary judgments rendered by the federal court. The court found no merit in the legal arguments the plaintiffs (Coalition For a Sustainable Delta) regarding alleged population level impacts caused by striped bass to E.S.A listed fish species in the Bay-Delta estuary. The court ruled decisively in support of the position of the DFG and defendant interveners that the decline of estuary’s listed fisheries was not attributable to predation by striped bass. Specifically, Judge Wanger agreed that the best science available has not shown any population level effect on listed species and one of DFG’s own Biologists, Marty Gingras, has stated that there is no science that shows any population level effect on listed species due to striped bass predation. There are also numerous peer reviewed predation studies done in the estuary and its tributaries that have come to the same conclusion.

• This settlement agreement does not supersede the provisions of the federal Central Valley Project Improvement Act (CVPIA) and it's legal mandate to double the population of all anadromous fish species of the estuary, including striped bass, from their mid-nineteen nineties population levels. In short, the proposed regulations work at cross purposes to the CVPIA federal mandate, thus conflicting with the intent of the federal law and setting up the potential for another round of litigation regarding the striped bass fishery. The Commission could find itself in the untenable position of passing regulations that could result in violating federal law and having to defend itself in federal court.

• As you may recall, Sec. 1700 of the Fish and Game Code requires, among many important conservation provisions, the management, on a basis of adequate scientific information promptly promulgated for public scrutiny, of the fisheries under the state's jurisdiction with the objective of maximizing the sustained harvest. This and other relevant code sections require the public’s fishery resources to be managed in the long term, on a sustainable basis. The regulations that the department proposed would not comply with this legal mandate.

• The proposal does not exempt San Luis Reservoir and the O’neil Forebay, one of our Nation’s premiere trophy striped bass fisheries. These two bodies of water are not connected to the Delta biologically and are not home to any listed species. This adds to my perception that, beyond my other concerns, I feel that the thoughts guiding development of this proposal were lacking in a comprehensive understanding of our state’s striped bass fisheries and the sensitivities of California striped bass anglers.

• While the Endangered Species Act encourages that all effort is brought to bear in assisting the recovery of listed species, it also discourages any action that is of dubious benefit and, indeed may do harm to the recovery efforts of listed species. Our State’s preeminent inland fisheries experts, Dr. Peter Moyle and Dr. William Bennett (Letter to Commission of Aug. 26th 2010) have reviewed the studies conducted in the estuary and concluded there is no peer reviewed science that shows ANY evidence of population level effects. Further, they point out that the removal of striped bass may have unintended consequences due to other predators that would normally be kept in check by their presence as a top predator. Their scientific opinion is backed up by respected fisheries biologist Dr. David Ostrach (Letter to the Commission July 19th 2010).

The last point is perhaps the most important as it demonstrates that this proposal offers little more than questionable benefit and even suggests potential harm to listed species. This, in addition to the other risks associated with the poor planning and policy behind this effort, leads me to strongly urge an outright rejection of this striped bass regulation proposal.

Fall has finally started to show. A little bite in the air the last couple of mornings. We had a system that came from the north and every thing changed. 72 hours ago it was 70-80s and I don't think it hit 60 last couple of days. It feels good. Once the fish settle in it will feel even better. I had to laugh at everyone bundled up like they were in Dec in New England. Fishing remains good as the water temps didn't really drop much on the large lakes and the low pressure front actually got them moving around. Good numbers of quality Stripers on the fly yesterday and the next 8 weeks should be really good on the lakes and California Delta. Today was supposed to be a Carp day but the overcast and wind killed that. I decided to go on a day hike in the Mtns instead. Intended to go hunting for Browns and other than one Brown taking stab at the fly just as I was lifting out of the water, that was it. I stayed in that area for roughly 4 hours and cast till my arm fell off for no other grabs. Other than a couple of guys on there way out  from a 4 day back country trip, there was no one and I really enjoyed it.