We hit the bay on Sunday. It was honking about 15kts out of the N at day break so we went and sat in a Santa Cruz diner for a few and hit the water since it was laying down pretty nice. Turned out to be a Chamber of Commerce day. Bit of advice...Never come to Central or Northern California  in the summer.  Oct-Dec is by far the best weather if there isn't rain. Fishing was good. We caught 25-30 off the local reefs and I just chowed on some fantastic fish tacos about an hour ago. Pacific Rockfish are a Bass like fish and range in the eastern Pacific from Baja north to Alaska. The different species can be similar but will often prefer completely different habitat's. Many Species never come inshore in catch able numbers.

A Great fish on fly and light tackle and are often pretty shallow along the kelp beds, Rocks and underwater Pinnacles from the surface to 60' is the areas I target. Anything below that can't be released alive in my opinion.  They are really the only fish  that I will harvest a few for the table. To damn good not too..We caught Lingcod, Blacks, Brown & Blue Rockfish in good numbers. Also a couple of Canary & Vermilion's with of course small Gopher Rockfish all over the place.  By far the best was the last fish. The beautiful Green ling. Such a cool fish! Being 30 minutes from home is the real bonus though. 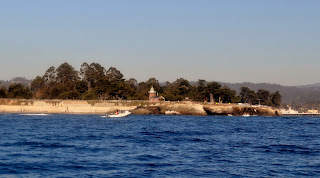 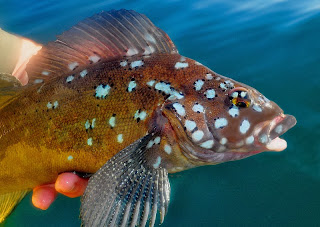 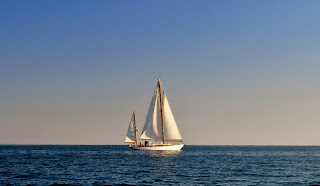 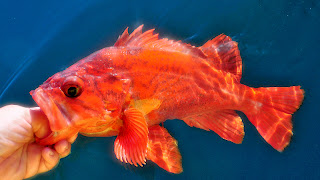 Posted by David McKenzie at 8:12 PM

Nice set of teeth on the Lingcod. Don't see a need for a dentist here.
I was out on one of the cattle boats one time and a couple of kids were throwing Rapala's at some Kelp beds and pulling in something in massive amounts. Not very good at salt water species here on the West Coast, but they had a blast while we were down deep.

I never thought of lingcod as a pretty fish but that green one is beautiful.

Gosh I haven't been on a cattle boat in many years. mark. It's one way to get out and get after it though. The sway of those sleds in combination of people puking there gutts out over the rail make me ill. Ha. Brent, lings are so aggressive and made for big ugly flies! I think Greenlings are my favorite though. No sharp edges to get you And they are so beautiful. The females can be an intense purple to bright orange color and everything In between. They really respond to small flies and buck tail jigs. That there is a male.