Where did the summer go?

Damn that was fast! Just like that and were heading toward another new year.  We had a warm front on Saturday that brought us some much needed rain. It was nice to get enough to knock the dust down and cool things down a little. The carp were happy the following day and the fishing was really good. A deep slough I know of with large numbers of difficult fish comes alive after a good rain.  Normally they are  hunkering down on the 4-5ft  bottom only giving you occasional shots at solo cruisers.. Rain will bring them up and they are really susceptible to dries for a short window. This day was no different, and I caught a good number on dries and also large dark streamers. They were schooling in the upper water column and a well placed fly would get chased down. This required you to stay put, and let them come to you.  Schools would come by and over shooting and leading the head of the school, would usually result in an aggressive eat either on top or just below the surface on a fast striped streamer. I enjoyed this for four to five hours before it started to shut down and I lost the good light. 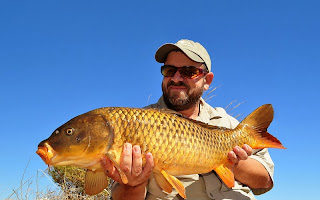 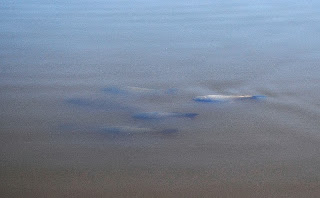 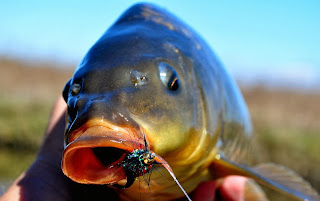 I also swung some streamers for Rainbows the last few days. Right now I like larger heavySculpin or crayfish bugs. Something that gets down there and knocks around. Numbers of smaller fish aren't a problem but..I did get and one big grab from a really nice 20" class bow. This big buck made an initial jump, went up stream and then down into the deep tail out. He fought hard but stayed manageable until I tried to climb down a little closer for a better angle, and just what I was afraid of, happened.  he shot down a narrow chute to down stream fast water and that was all she wrote. I tired to put the breaks on and it just came unbuttoned. I was sick! I really wanted that fish! Not ten minutes later another nice fish latches on and I just about have this one beat and starting to feel good but not getting to giddy and it goes under an undercut root bank. F&*^ !  And that was that. 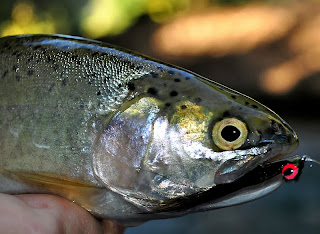 Posted by David McKenzie at 6:42 PM

I am glad fall is here. Most the fools stay off the lakes and the fish are still biting.