My plans to head over the Sierras changed a bit and that won't happen unitl the morning..With nothin else to do but fish,  I went scouting some more areas..First place had dozens upon dozens of fish up in the flooded weeds..Some spawners, some chasing fry and crayfish. Floating grass made things a little tough but if you could get a bug infront of one it was an instant grab. They would come out of the water and pounce. Infact, most would actually jump clear of the water when hooked. That was pretty friggin cool! All were in the 5-7lb range and again, I didn't see anything to write home about but I had about 5 acres of fish to myself except for one lone bait guy putting a serious harvest on them. If there is a place that needs some harvesting this is one of them. 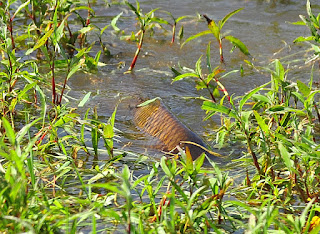 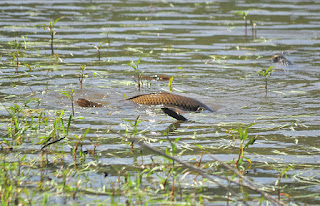 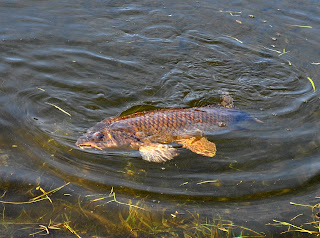 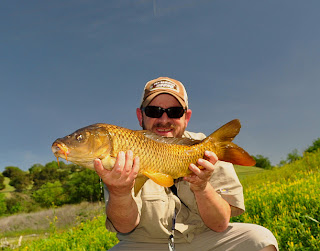 Remeber I told you I was holding off on some good water since I had a friend I wanted to put on some quality fish? Well, it's kind of like leaving dope with a crackhead and thats always a bad idea.. As I was driving home I thought I'll just swing by and check it out. First scan saw four or five tailers in the 8-10lb class working a small tail out. I threw on one and quickly decided to walk further and leave it alone as hooked fish in that spot bolt down stream and will own you with a 5wt with all the broken concrete and rebar..Up the trail I had another vantage point and saw a pretty nice solo fish working hard about 10 feet from the bank. Looked to be in the 10-12lb range and I just couldn't help it. Infact I never thought twice about it Ha! Carfully snuck down, roll cast up stream a little and she went directly in line with the bug about the time it settled..Two pops and I saw her jerk and mouth open and close quickly so I ripped into her..With tight qtrs, wood and others hazards I really didn't think I had a chance on the 5wt so I really put some heat on that fish and it worked out in the end. Ive lost so many fish in this place due to submerged junk it's ridiculous. About 5 min later I had a nice fat fish and an epic battle on a light stick and 6lb flouro.  I scouted some more water further down stream and didn't see to much. Just a fish here and there with most out of range.

Nevada in the morning! 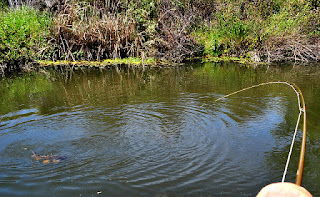 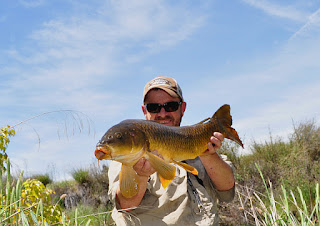 Posted by David McKenzie at 3:17 PM

Hi... nice pictures. and congratulations!!
Other aprils, in Spain , the carps were into grass in the lake I used to go, and how you say it is difficult to catch them... but this winter was dry so...no carps into the grass.
Bye

I love your photos! As much as actual carp fishing, almost. That lake with 5-7 lb. willing carp would please mw enough. I tell guys who want to try carpin that it is the reel often not the rod, that means the most with these fish, unless the fly is very large or the rod obviously too small.